Picture of a Pixel

Mary: remove the unused blocks and then hide everything except the five they will be using: draw picture, rgb pixel, draw pixel, paint color from pixel, and paint color. --MF, 9/9/21 (Need to figure out how to hide blocks. --MF, 9/12/21)

In this activity, you'll see how pixels make up an image.

The screen you're looking at is made up of thousands, if not millions, of pixels. Each pixel is made up of red, green, and blue light, and the screen combines pixels with different amounts of each of those three colors to make all the different colors on a screen.

Here's what a white pixel looks like up close:

A pixel (short for picture element) is the smallest programmable unit of color on a screen. 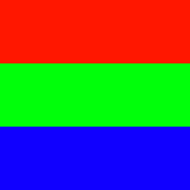 When a computer draws a picture, it's actually drawing it pixel by pixel, activating the appropriate red, green, and blue components of each pixel in the screen to replicate the picture.

The project has a single command block:

Resolution is the level of detail in an image.

The draw picture block takes two inputs, the name of a picture and a resolution (the number of pixels wide that the resulting image will be). Both inputs are dropdown menus, so you can click them to select a different value.

Eventually, with enough pixels, the picture should become quite clear. Here's an example:


Click the image for an animation.
Why does the higher resolution image look dark?

These aren't really pixels, because even the block's highest resolution, 128, is much lower than your screen's actual resolution. These are models of pixels created to show you how pixels combine to make images. Each of these "fake pixels" can only be at most one third as bright as a real pixel because each part of one of these fake pixels is displayed on your screen by real pixels that each only include a third (one color) that real pixel's total possible brightness.

In this activity, you learned that images are made up of pixels (tiny squares with different amounts of red, green, and blue), that resolution controls the number of pixels used to make up an image, and that higher resolution images are more detailed and more recognizable.